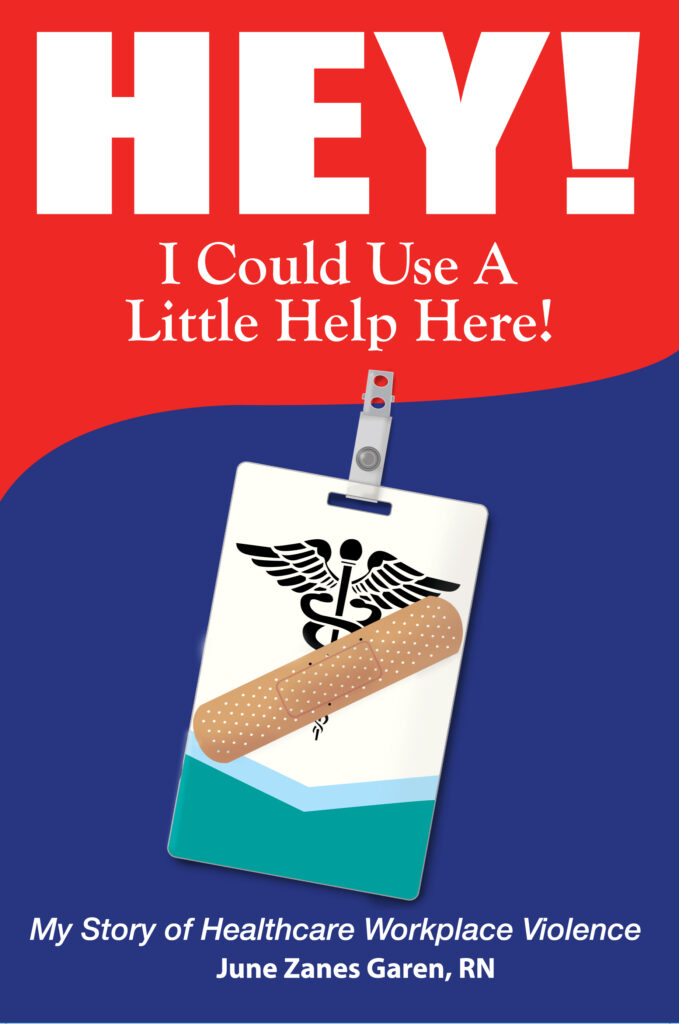 CHANGE IS NEEDED NOW, MORE THAN EVER BEFORE.

It isn’t uncommon for a particularly violent assault on a healthcare worker to spark a media frenzy, only for the story to die down without any additional safety measures being implemented to ensure that these kinds of incidents don’t happen again.

By buying and reading my book, you will not only be able to begin your trauma healing process with the help of a “first aid kit” and bullet journal pages, but also discover your voice to advocate for better, more effective safety measures in the workplace.

To purchase a copy of Hey! I Could Use a Little Help Here! please visit any of the links at:

In memory of a nurse who died from injuries sustained during a patient assault.

This chapter is dedicated to the memory of Lynne Sausse Truxillo, RN, who died on April 11, 2019 from injuries sustained during a patient assault while on duty at Baton Rouge General Hospital.

It is not my place to intrude on the privacy of people collecting the pieces of their lives, which have been shattered by the loss of a loved one. As I pen this chapter, I am mindful that it has been barely a year since the life of a mother, daughter, sister, wife, aunt, friend, and colleague was tragically taken from the world.

A year is such a short time, no doubt measured doggedly in holidays, family gatherings, life celebrations, and seasons. I can only imagine how each of these hurdles lays open the scars of that loss. Please understand, I am writing solely from my own heart with information supplemented by a simple internet search of Lynne Truxillo, RN.

An obituary could be deemed the final summary and a statement of the life lived. An obituary served—and serves—the vital purpose of boiling down the sap of living into the sweet syrup of remembrance.

Much of what we think is vitally essential to attain and maintain a good life—filled with well-organized financial stability and a svelte physique—is boiled away. The essential ingredients of an eternal legacy—family, friends, compassion, traditions, and integrity—provide the pleasant taste that lingers. From reading Lynne’s obituary, I have learned that Lynne left many footprints on the journey of her life. Her abundant legacy contains the sweetness of humor, loyalty, kindness, love, and the gift of providing a healing touch for those who were struggling.

This story began on April 4, 2019, when a patient initiated an altercation with one of Lynne’s fellow nurses. Lynne stepped in to protect her colleague and the patient subsequently turned his attention to physically assaulting her. During that violent attack, Lynne sustained multiple injuries, which, according to the medical examiner, ultimately cost her life.

At this point, you may even be wondering why I feel compelled to spend time ruminating on the life and times of a woman I have never met. From what I have read about Lynne Truxillo, however, I know that I would have liked her. According to the articles written, she was fun, and funny, a devoted mother, and she received an award for being an exemplary volunteer at her children’s school. She was passionate about helping people and loved nursing.

She hailed from New Orleans and loved all things Mardi Gras.

What gave me a strong sense of kinship and fierceness about a stranger’s death? Quite simply, as I looked at the list of her injuries sustained in a patient assault, I understood that it could have been written about me.

I was spared; Lynne wasn’t. It was that simple.

An empty space has taken the place of the one who should have been there, but has been abruptly snatched away.

While I have a voice, Lynne’s was forcibly taken from her. In dying, Lynne gave me something which had been missing since I was attacked – a clarity of purpose. As she rushed in to help a co-worker, she provided an example to all of us. Lynne’s story helped me to find my own voice to advocate for safe health care workplaces, and to share ideas and resources for healing from violence experienced within that workplace.

I can imagine the horror of watching a colleague being attacked. I worry about the coworker who Lynne protected that day, since being a survivor can be so bittersweet. I can feel the shock of how quickly the violence escalated, tasting the bitterness from the desperation of being so alone in the immediate first seconds of the downwardly spiraling situation.

I can breathe the “canned” hospital air and smell the anguish of not knowing how this whole mess will finally play out.

I can picture Lynne stepping in without hesitation to protect a co-worker. She probably did not even think about it. She just did it.

I can sense the urgency and potential doom preceding Lynne’s final trip to the hospital, and can sense the fear of defeat on April 11, 2019, as the medical staff at the hospital where Lynne died realized that the resuscitation attempts were unsuccessful.

We all lost so much that day, but Lynne’s family suffered the most tremendous loss of all. The story is Lynne’s and theirs. It is not mine; I can only feel and imagine the ripples in the pool of their lives, after that stone was brutally thrown into it. I can only imagine their pain and suffering. But I feel that we all must try to understand; we all must let Lynne and others like Lynne live on by not letting her death be in vain.

Lynne, you see, filled an ample space in the universe, yet her family now faces a world where an enormous void has taken her place. Her seat will remain empty on holidays and at family dinners. Her images will be missing from her children’s wedding photos.

The rest of us have lost a kind, compassionate, and selfless healer. Our humanity has been diminished.

I’d like to think that there is a heaven with a spot reserved in it for people who work in health care. I can almost picture how lovely it would be … full of color, flowers, and lots of sparkles.

I envision this beautiful nurse greeting newcomers by organizing the resident souls into one of the traditional New Orleans events, a Second Line. I close my eyes and see a long parade full of departed friends, family, and colleagues waving handkerchiefs and dancing happily behind a celestial brass jazz band playing that old Big Easy classic, “When the Saints Go Marching in.”